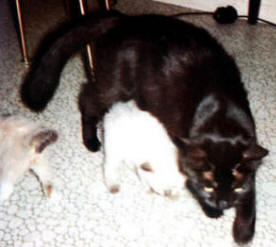 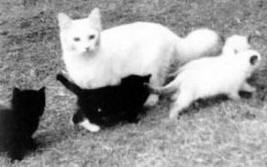 Ok, so here is where the story really gets interesting and confusing – but hang in there. I NEVER thought I would fall for a Mink or Solid Ragdoll, but my love of variety in color and patterns just couldn’t be quenched.

While I so very HIGHLY RESPECT the show breeders out there promoting the Traditional Ragdolls, I can’t resist the vision of the Ragdoll attitude and temperament in other colors and patterns. The first time I saw a Mink Ragdoll,  it was only in a picture. Mind you this was many years ago and no one here in Georgia had or bred Minks – thus leading me on a virtual quest to find one.

After many false leads and contact with as many people still alive and having known Ann, I came across a mink line. These lines came from Canada down to Texas, and I brought them to Georgia.

I’m sure people thought I was crazy, but now we have many breeders in Georgia and across the US breeding old lines – thus making them more popular, and saving that branch of the bloodline. Mink Ragdolls are NOT a separate breed; they differ in only a few aspects of appearance. The temperament is the same.

Mink Ragdolls have been around since the beginning of the Ragdoll breed. YES, minks are purebred, SBT and TICA registered Ragdoll cats. A look at early pedigrees from the Ann Baker cattery, called Raggedy Ann, you will see the names of such Ragdoll cats as Josephine (a solid white Persian or Angora), and Buckwheat (a black Burmese-type cat) which confirm this statement.

The Burmese gene is cb which creates a brownish coat for a genetically black cat. The points (face mask, ears, legs and tail) are very dark and the rest of the body is richly warm. The mink gene isn’t a separate gene, but rather a combination of the pointed gene and the Burmese gene represented by (cbcs). (see Ragdoll history)

When you breed two mink Ragdoll cats together you’ll get the following results:

Mink is not a new breed of Ragdoll (nor even a new pattern), but rather it is a bloodline which can be traced back to the very first Ragdolls produced by Ann Baker and other IRCA Ragdoll breeders.

Most breeders today choose to solely continue with the pointed colors. Only a handful are devoted to continuing with these old lines and breed with Mink and Solid Ragdolls.

So why is this Ragdoll named Mink? They are called “Mink” because the fur of this type of Ragdoll is still smoother than that of the pointed Traditional Ragdoll. It may seem to hardly be possible, but they truly feel like a ladies mink stole or a cashmere rabbit – incredibly soft.

Mink Ragdoll kittens are born with color (yes full color, not white). The point color of the mink is much stronger, richer and darker than that of the traditional Ragdoll.

Now I hear you asking, “What colors and patterns are available in this type of Ragdoll?” Mink Ragdolls come in all the traditional colors of seal, blue, chocolate, lilac, flame, cream, tortie and blue/cream.

Eye color, however, between the traditional pointed variety, the Mink Ragdoll and the Solid Ragdoll are a distinguishing feature. In the traditional Ragdoll kitten, the eye color is always blue. The Mink Ragdoll has a gorgeous blue or aqua (blue-green) eye coloring, resembling those pictures of the Caribbean Sea. Whereas, the Solid Ragdoll kitten has eyes of a lovely green, copper, blue, blue-green, or even odd-colored eyes.

Do Mink and solid Ragdolls still have the same characteristics as the traditional variety of Ragdolls?

Most Most definitely!! They are a large, docile, floppy, people-friendly cat. The Ragdoll cat or kitten does not wish to be left alone, it is a very social creature. Other than having different markings, an SBT purebred TICA registered Mink or solid Ragdoll is exactly that, a True Ragdoll !!

Many breeders do not carry the Solid Ragdoll as it is considered to be “controversial”. However, having said this, the number of Ragdoll breeders opening their hearts and minds to accepting Solids and Minks into their breeding programs is rapidly increasing.

So, what color does a Solid Ragdoll come in, you ask? Solids can be seen in black, blue, chocolate, lilac, white, red, cream, blue/cream and calico/tortie. Solid Ragdolls also have the same patterns as the “traditional” Ragdoll. That is colorpoint (having no white), mitted (white mitts on front paws and boots on back legs with white chin and bib), and bicolor (an inverted “V” on its face, white on all legs, chin and bib). Any of these patterns and colors can also be marked with the lynx , smoke, shaded or silver.

Eye color between the traditional pointed variety, the Solid Ragdoll and the Mink Ragdoll are also a distinguishing feature of each. In the traditional Ragdoll kitten, the eye color is always blue. Whereas, the Solid Ragdoll kitten has eyes of green, copper, blue, blue-green, or even odd color eyes. The Mink Ragdoll has a blue or lovely aqua (blue-green) 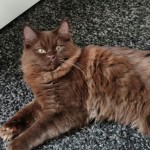