What Is A Ragdoll Cat?

A Ragdoll Cat these days are as much fact as they are fiction, Folklore has many tales of how this breed came to be but the simple fact is that a lady from California in the late 60″s named Ann Baker came up with the breed, Ann was an established cat breeder of Persians. It was genius & luck that played the title role in coming up with this breed. The pictures below are of Ann Baker throughout her career.

(Click any image below to view full sized photo)

I would have liked to have met her but she passed away in the 90’s. I did however meet a close friend of hers and she described Ann as very loving to her cats and that she was VERY selective of potential owners and breeders. Yes, Ann had her quirks (but dont we all) I find some of the stories of her very heartfelt now to know some of the things Ann had to go thru with the other breeders she had contracted her cats out to, there are always two sides to a story. I find all of the fact and fiction very interesting and am ALWAYS looking for their and her history, info & whatever I can find on her and the breed.

After several selected generations of breedings, the Ragdoll was established. Ann’s first pair was said to be a white angora (Ann told a friend that Josephine (mother of the breed) was Angora / Persian x Turkish Van) and (father of the breed) was a Seal Birman, (it wa more likely Daddy Warbucks was a long haired Siamese mix as to find a true Birman was extremely rare in those days as a stray seems highly unlikely that and Ragdolls have been DNA tested for the white spotting gene of the Birmans and they do not match)while Ann is credited with the introduction of this new breed the breeders after her have built this breed up to the standards of the CFA

Josephine was of a Persian/Angora type and had litters sired by several unknown male Birman or Burmese-like cats, one of which had the Siamese point coloration. Baker believed that Josephine was subject to a secret government genetic experiment during treatment at the lab, and claimed that it made Josephine docile, relaxed when picked up, and immune to pain. Another claim from her was that the kittens were so relaxed because mom had a car accident while she was pregnant. and after Josephine recovered, she produced kittens with the easy going temperament. When the subsequent litter produced more of the same,

Ann Baker (an established Persian breeder) purchased several kittens from the owner, who lived behind her, and believing she had something special, set out to create what is now known as the Ragdoll. The breed was selectively bred over many years for desirable traits, such as large size, gentle demeanor, and a tendency to go limp when picked up, as well as the striking pointed coloration.

Baker, in an unusual move, spurned traditional cat breeding associations. She trademarked the name “Ragdoll,” set up her own registry—International Ragdoll Cat Association (IRCA)—and enforced stringent standards on anyone who wanted to breed or sell cats under that name.The Ragdolls were also not allowed to be registered in other breed associations. In 1975, a group led by Denny Dayton broke rank with IRCA with the aim of gaining mainstream recognition for the Ragdoll. This group eventually developed the Ragdoll standard currently accepted by major cat registries.

Since the spread of the Ragdoll breed in America during the early 1960’s a breeding pair of Ragdolls was exported to the UK. This was followed by eight more cats to fully establish the breed in the UK.

In 1994, a second group decided to leave the IRCA and form their own group due to increasingly strict breeding restrictions. This group later established the Ragamuffin breed. Because Baker owned the rights to the name “Ragdoll”, no offshoot groups could call their cats Ragdolls.

The docile and floppy nature of the Ragdoll cat is a characteristic thought to be passed down from the Persian and Siamese breed. There are contrary statements on whether this trait might be the result of genetic mutation. The extreme docility of some individuals have led to the myth that Ragdolls are pain-resistant.

Ragdoll Cats  are affectionate, intelligent, relaxed in temperament, gentle and easy to handle.

The Ragdoll Cat is one of the largest domesticated cat breeds with a sturdy body, large frame and proportionate legs. A fully-grown female weighs from 8 pounds to 15 pounds . Males are substantially larger, ranging from 12 pounds to 20 pounds The genes for point coloration is also responsible for the blue eyes of the Ragdoll. More intense shades of blue are favored in the show ring. Though the breed has a plush coat, this coat consists mainly of long guard hairs, while the lack of a dense undercoat results in, according to the Cat Fanciers’ Association, “reduced shedding and matting. Mitted Ragdolls, which weren’t allowed titling until the ’08-’09 show season, will often be confused for Birmans. The easiest way to tell the difference is by size (the Ragdoll being obviously larger) and chin color (Ragdolls have white chins, while Birmans have colored chins), although breeders recognize the two by head shape and boning.

Ragdolls come in six different colors – seal, chocolate, flame, and the corresponding “dilutes” such as blue, lilac and cream. This also includes the tortoiseshell pattern in all colors and the three patterns. All Ragdoll kittens are born white. They have good color at 8 – 10 weeks and full color and coat at 3 – 4 years. There are now different patterns & colors, however only 3 patterns are accepted for show. Some breeders are working on solid, shaded and silvers. 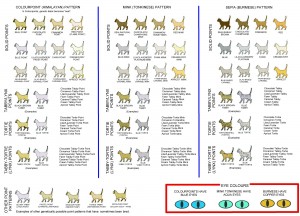 Relation of Coat Color to Eye Color in Ragdoll Cats 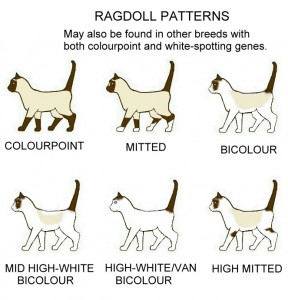